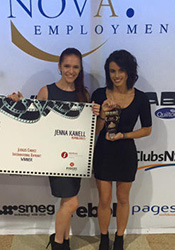 Jenna Kanell won the 2015 Film Challenge’s “Best Film Award” for a film inspired by her brother who lives with Autism. “Bumblebees” has since played at more than 80 film festivals around the world, and was a “Judges’ Choice Winner” at the Focus on Ability Festival in Sydney, Australia. Jenna developed a popular TED talk about her experiences creating the film and shares what it has meant to her and her brother.