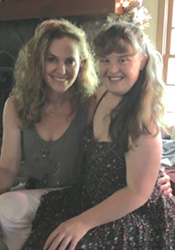 Jamie Brewer was recognized as ‘Best Actor’ in the 2017 Film Challenge. The film she appeared in, “Whitney’s Wedding,” has screened in many film festivals internationally, and Jamie recently attended the South Dakota Film Fest where the film received rave reviews and fans were pleased to get the opportunity to meet and take photos with her. Perhaps best of all, the internet popularity of Whitney’s Wedding has added to Jamie’s fan base. Following her role in American Horror Story, Jamie Brewer won best featured actress in a play for her role in the Off-Broadway show “Amy and the Orphans.”  She worked on the play with her film challenge mentor Amy Brenneman.